Garmin just announced the new Edge 830 bike computer, completing a major update to their entire lineup of popular ride-tracking devices. It was unveiled on the same day as the new Edge 530, a model that shares a great number of features and capabilities. In fact, when you look at them side-by-side, the two seem almost identical physically. So, what exactly makes them different from one another, and why does the Edge 830 cost $100 more? 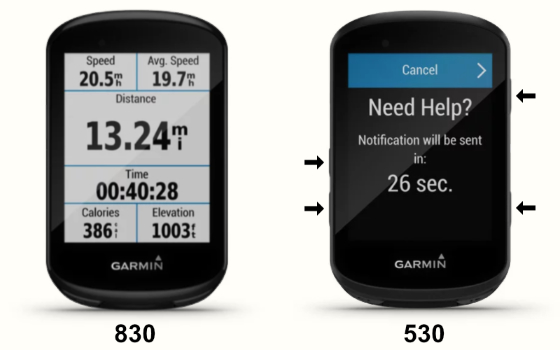 Aside from the protruding side buttons, the Edge 830 looks nearly identical to the Edge 530

One of the main points of differentiation is how you control the device. The new Edge 830 features a touchscreen as the primary way to interact, whereas the Garmin 530 can only be controlled with its six hardware buttons. If you're the type of person who prefers using a touchscreen, the new Edge 830 may be the better choice for you.

Even though the touchscreen is the primary way to control the Edge 830, it has three physical buttons. A button on the left side can be used to power the unit on and off, to enter and exit sleep mode, and to lock the touchscreen. The bottom right of the Edge 830 feature a dedicated Start and Stop button, and the bottom left features a dedicated Lap button. Incidentally, if you've ever pressed your Lap button at the wrong time and wished you could correct it, SportTracks gives you a way to easily edit lap button data.

The other way that the new Edge 830 differs greatly from the new Edge 530 is navigation. If you want to be able to enter in an address and have your bike computer provide you with turn-by-turn navigation instructions, you are going to want the Edge 830 — because the Edge 530 cannot do this.

We covered the announcement of the Garmin Edge 530 bike computer in a separate post, and took a close look at all of the improvements and new features. Since every single new feature and improvement is also found on the Garmin 830, you can check out that post to learn more about it. Here's a quick summary of these new features:

In a way it seems like Garmin wasn't sure if they should make a device that was primarily touchscreen controlled, or if they should make one that only had buttons. Instead of committing to a decision, they simply made both. Whatever the reason may be, it's nice to have more options. Both the new Edge 830 and the Edge 530 are compelling new cycling trackers, and the fact that they both automatically send their workouts to SportTracks means you can't go wrong with either one. ;)

Garmin's most popular bike computer gets a big update
Pointing the way to the future of bike computers
SportTracks integrates with the Wahoo ELEMNT on iPhone + Android
Get SportTracks
Plan. Track. Analyze. Share.
All in one place.
Sign up